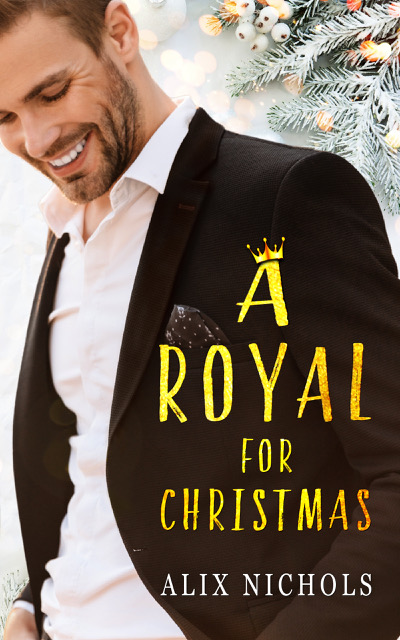 I’m Camille— the only pauper in Mount Evor.

But that’s not why I’m on the no-fly list.

Six years ago, the principality’s royal palace went up in flames.

My sister Jeannette, who worked there, disappeared.

The inquiry blamed her for the arson.

Since then, I’ve been an outcast—compromised and harassed—but determined to clear my sister’s name.

Four weeks before Christmas, the hunky Louis de Valois, Duke of Arrago, raps on my window.

What if he has news about Jeannette’s case?

I invite him in.

He glances at his watch and declines my invitation.

And then he asks me to marry him.

Perfect for fans of Jill Shalvis, Lauren Landish, Nicole Snow and Louise Bay, this full-length novel stands on its own within an ongoing saga. 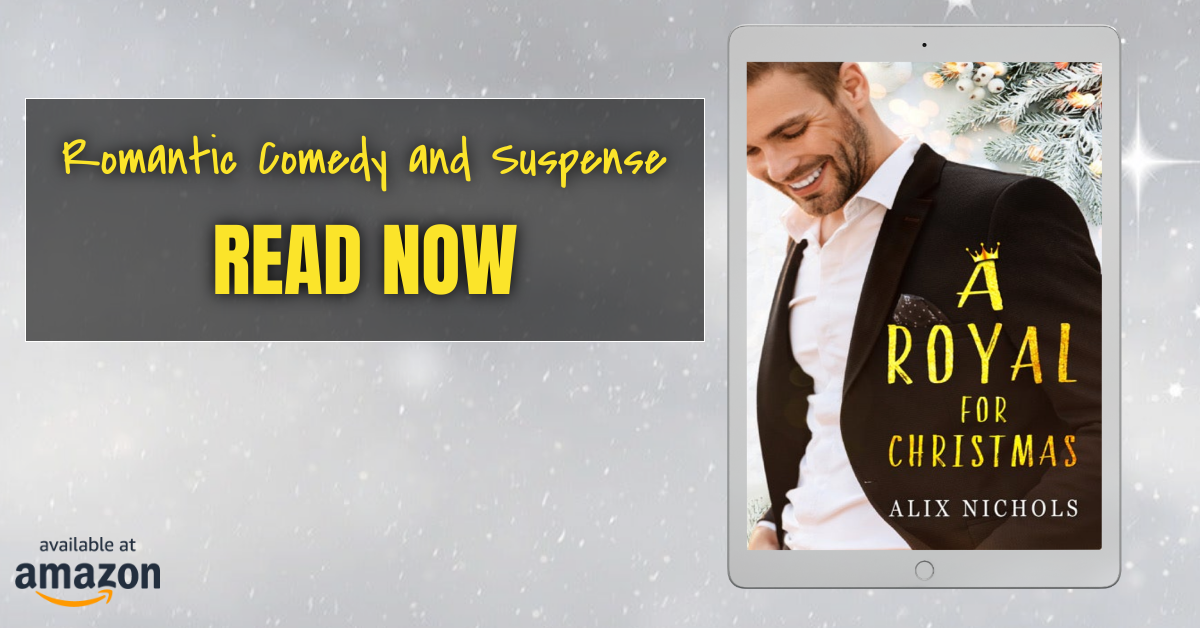 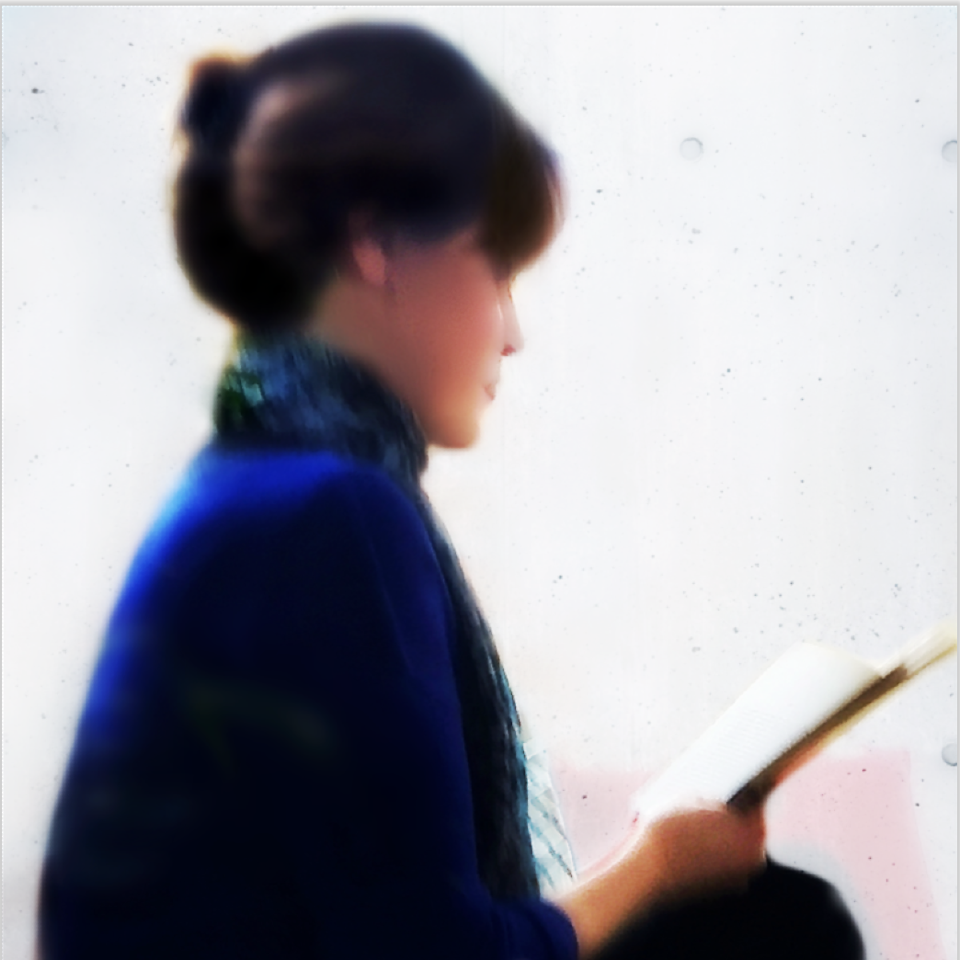 Alix Nichols is a caffeine addict, a fan of Mr. Darcy and an award-winning author on Book Riot’s list of 100 must-read international romances.

She pens sexy romantic comedies and romantic fantasy. Her books have been described as “pure pleasure” (Kirkus Reviews) that “keep fans of romance hanging off the edge of your seat” (RT Book Reviews).

At the age of six, she released her first book. It featured highly creative spelling on a dozen pages stitched together and bound in velvet paper. Decades later, she still writes. Her spelling has improved (somewhat), and her books have topped bestseller charts around the world.

She lives in France with her family and their almost-human dog.

Is Christmas really the most wonderful time of the year? New Yorkers Robyn Lane and Sidney Bellows aren’t so sure. Robyn has always dated struggling creative types. For once, her parents would love her to bring someone with health insurance and a 401(k) to their Chrismukkah celebration. Her actor boyfriend doesn’t qualify. While across town,

Sidney’s professional life already belongs to her parents. She’s an attorney at her father’s law firm and she works tirelessly to keep her love life private. If she brings her lawyer boyfriend to their annual Christmas extravaganza, her parents will have the wedding planned by New Year’s Eve.

A mutual friend playfully suggests they trade boyfriends for the holidays. The women share a laugh, but after copious amounts of wine, decide The Boyfriend Swap could be the perfect solution. This way, Robyn can show off her stable attorney boyfriend and Sidney’s high-society family will take no interest in her flaky actor beau.

It’s a brilliant plan—in theory. In practice—not so much. When Will turns out to be the boy-next-door Robyn crushed on hard throughout her teenage years, and Sidney’s family fawns all over Perry like he’s an Oscar-winner rather than a D-list wannabe, one thing is certain: The Boyfriend Swap might just change their lives forever.

Wow, this sounds like a fun read. Here’s a taste–

“Give the idea a minute to percolate,” Sidney said calmly. Her mouth remained in a straight line, indicating she wasn’t joking.

My stomach quivered with unease, but I took calming breaths to settle down. According to Anne Marie, Sidney was very opinionated and sometimes wouldn’t shut up until she got her way. I’d just let her keep at it until her throat hurt or she passed out from too much wine.

Sidney continued, “If left to our own devices, the holidays are going to blow chunks, but if we pool together, we’ll all be better off. And it’s only for a few days. It’s the perfect solution to our mutual problem.”

I stood from the table and removed a bottle of water from the refrigerator. I poured a glass and placed it in front of her. Hopefully she’d take the hint. The wine was clearly going to her head.

“What do you say?” she asked the minute I sat back down.

The girl had to be on more than fermented grape juice. Hallucinogenics maybe? Whatever influence she was under, she clearly believed her ludicrous plan had merit and I was going to have to put my foot down. “I say that I’m a grown woman and shouldn’t need to lie to my parents about who I’m dating.”

Sidney nodded. “I agree. You shouldn’t.”

A breeze of relief zipped through my core. “Glad we’re on the same page.”

“You shouldn’t have to lie, but in our case, we sort of do. If we want to make it to the New Year without requiring a straitjacket, that is.” She smiled, a slick grin I was certain both assured her clients and put the fear of the devil in her adversaries in equal measure.

Learn about about the author here–

A born-and-bred New Yorker, Meredith Schorr discovered her passion for writing when she began to enjoy drafting work-related emails way more than she was probably

supposed to. After trying her hand penning children’s stories and blogging her personal experiences, Meredith found her calling writing romantic comedy and humorous women’s fiction. She secures much inspiration from her day job as a hardworking trademark paralegal and her still-single (but looking) status. Meredith is a loyal New York Yankees fan, an avid runner, and an unashamed television addict. To learn more, visit her at http://www.meredithschorr.com.

And, on top of a great book, Meredith is giving away a $10 Amazon or BN (winners choice) GC to one random person. Just click into Rafflecopter.

Enter to win a $10 Amazon/BN GC – a Rafflecopter giveaway